Question: 1 you have just read about the worlds largest bacterium...

1) You have just read about the worlds largest bacterium. It has a diameter of around 100 microns (μm), roughly the size of a eukaryotic cell, but it also has a very large sulfur granule inside of it occupying a lot of its volume. The cell is spherical in shape. Your friend is arguing that it violates the surface volume ratio required for a prokaryotic cell to function properly. You want to show them they are wrong by calculating the S/V ratio for this organism. From your microbiology class, you know that for a eukaryote, you would expect the S/V ratio to be around 0.03 or less. 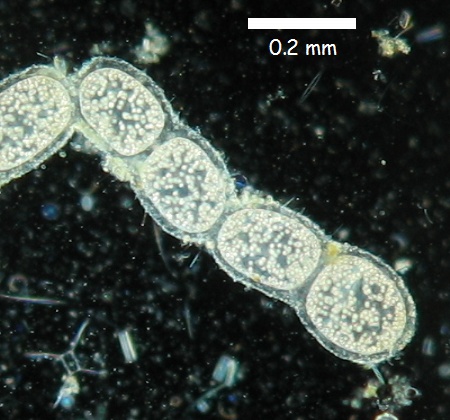 Figure: A microscopic image if Thiomargarita (your bacterium). Note the large spherical granule inside each spherical cell.

You measure the radius of the granule to be 96.6 μm.

2) The surface to volume ratio is a key variable in defining prokaryotic cell structure. From the example of a sphere, you can ascertain that the S/V ratio scales as

We can also estimate this ratio for more complicated cell shapes like a rod. If we assume a rod can be approximated by a cylinder, then our S/V relationship would look like

where l is the length of the cell.

So, if the cell radius does not change but the cell length (l) increases what would you expect to happen to the S/V ratio?