Question: a the separation of a mixturemixing of benzene toluene and...

The separation of a mixture(mixing) of benzene, toluene and xylene is carried out in two columns of Distillation.

To the first column him(her) 100 are fed mol/h on a mixture(mixing) that 40 % contains in mol of Benzene and the rest of toluene and xylene.

In the dome of the first column 40 are obtained mol/h of Revealed with a composition of 95 % in mol of benzene and the rest of toluene and xylene, which They are in relation from 10 to 1.

The funds of the first column (60 mol/h) feed the second one.

OfThis column goes out the distilled one that contains 5 % in mol of benzene and the rest of toluene and xylene, Which are also in relation from 10 to 1.

For the bottom(fund) of the column xylene is obtained by 100 % of Purity. Determine the degrees of freedom for the global system and for each of the towers, and calculates the flows and compositions of all the currents.
R = current that joins to both towers: yX=0.39, yT=0.5767, yB=0.0333

The columns of distillation for stages are devices that separate volatile materials by means of the boiling of the most volatile components.In order that there happens a suitable separation, these devices need of the condensation of at least a part of the steam of exit, for it to return to the column.

Consider the system that appears in the following figure.Suppose that column is used to separate a mixture(mixing) of 3 components, which consists of 7 % in mol of acetone,
61.9 Acid acetic % and the rest of acetic anhydride.

The column is designed in order that produces one current of funds that does not contain acetone, and the distilled one that contains 10 % of acetone and 88 % Of acetic acid.

If it occurs to the column so that 60 % of the steam is returned as reflux detached on the top part, realize an analysis of degrees of freedom and calculates all the flows supposing that they are going to produce 700 mol/h of distilled. 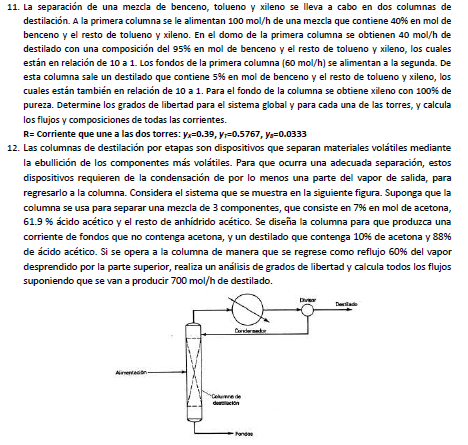