Question: analyze the typical frame shown spaced at 8 of the...

Assume that the dead loading results only from the 6”-thick roof deck with concrete density of 150 𝑙𝑏 𝑓𝑡3 (neglect the selfweight of the beams and columns).

a. Determine the axial force NS, shear force VS, and moment MS diagrams due to the unfactored snow load, assumed as 35 PSF, applied to a horizontally-projected area.

b. Determine the axial force NW, shear force VW, and moment MW diagrams due to the unfactored wind load, assumed as 20 PSF, applied to the right horizontally, upon the vertically-projected area of the roof deck. 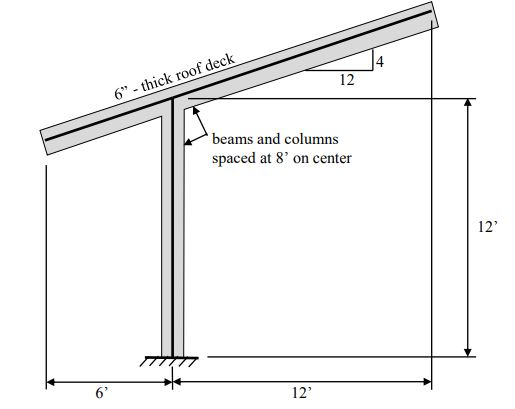