Question: do 1 real gdp is intended to measure the real...

Real GDP is intended to measure the real value of goods and services produced, not the stock of money, or the balance in your bank account, or whether you are in debt or not. To do this, we may use information on total expenditures - measured in dollars - but the purpose is always to recover an index of real output. For this homework, you need the following information to calculate real GDP over several periods. First, you know total expenditures (dollars spent) on three different kinds of goods

where the “N/A” for vape pens is because no one collected data on this in 2015 because they were still pretty new. You also have price data that was collected on several items. 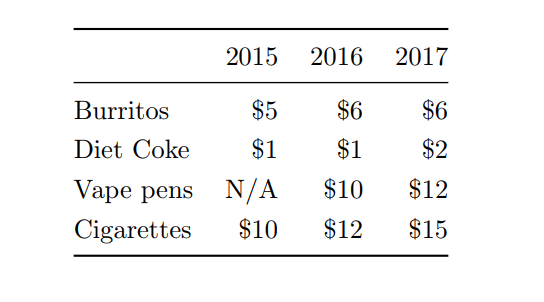 Given that information, you need to calculate an index of real GDP for the economy. To start, just focus on the 2016 and 2017 numbers.

• Neither of the two indices that you got for real GDP is exactly right, as there is no right answer to which year’s prices you should use. So we typically use a geometric average. Take the two indices of real GDP and multiply them together. Then take the square root of this product. That is your combined index of how much real GDP changed from 2016 to 2017. Did it go up or down?

3.The prior point makes clear that we want to value output in each year at the same set of prices. A different way to do this is to separately calculate how much prices went up from 2016 to 2017, and then use that to deflate total expenditures.

• Again, neither of these two price indices is exactly right, because there is no reason that using either the 2017 quantities (Paasche) or 2016 quantities (Laspeyres) is better than the other. So take the two prices indices, multiply them together, and then take the square root. This is the Fisher price index for 2017. Does it say prices were higher or lower?

4.. Okay, now go back and redo the calculations of real GDP, but this time comparing 2015 to 2016. You’ll notice that you do not have any information on vape pens from 2015, either in expenditure or price. You’ll have to come up with some way of including vape pens in your calculation, because they do show up in 2016. That means you need some way of comparing the quantity and/or price of vape pens between 2015 and 2016. There is no right answer. There are multiple things one could do, but you should justify in writing why you chose what you chose.