Question: in fission yeast entry into mitosis is regulated by the...

In fission yeast entry into mitosis is regulated by the phosphorylation status of Tyrsin-15 (=Y15) in Cdc2. This residue can be phosphorylated by the two kinases Wee1 and Mik1, and de-phosphorylated by the phosphatase Cdc25. Mitosis is triggered when the phosphatase activity of Cdc25 overcomes the kinase activity of Wee1/Mik1.
To determine if the checkpoint pathway inhibits mitosis by targeting Cdc2 Y15 phosphorylation, cells with a Cdc2-Y15F mutation were studied. These cell cells are viable but “wee” (small), because Cdc2 cannot be phosphorylated on F15. Y15F cells and wild type cells were synchronized in G2 by elutriation (a technique that allows isolation of the small newborn cells) and irradiated, and the kinetics of completion of mitosis was monitored (Figure 9-1). Unirradiated cells of both strains were included as controls. 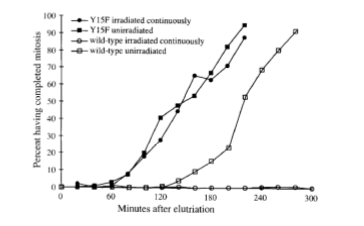 In order to investigate if Cdc25 is part of the checkpoint response, cells deleted for mik1 and carrying a temperature-sensitive mutation in wee1 (wee1-50 ∆mik1) were studied (Figure 9-2). 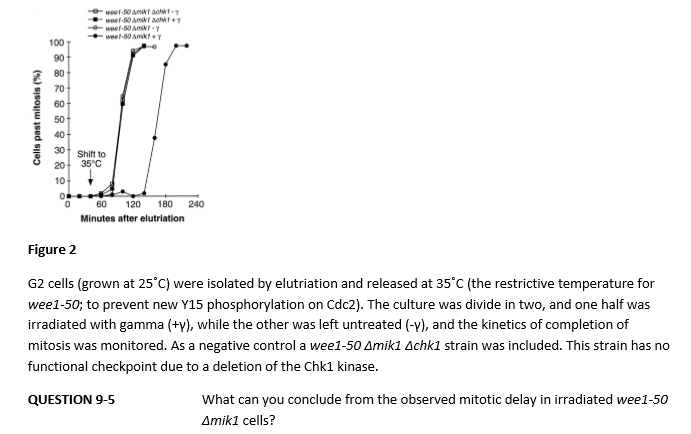 In subsequent experiments it was shown that Chk1 can directly phosphorylate Cdc25, but this does not appear to affect the Cdc25 protein level (data not shown). Therefore, the subcellular localization of Cdc25 was investigated in the absence (-IR) or presences (+IR) of irradiation (Figure 9-3). Upper panel shows MYCtagged Cdc25 visualized by indirect immunofluorescence, while the lower panel shows DNA by DAPIstaining. 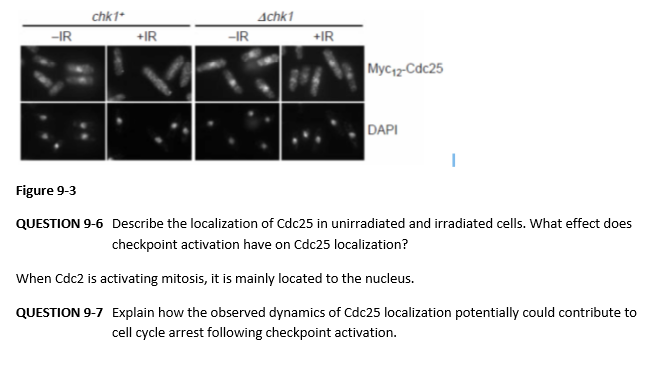