Hereditary Angioedema (HAE). Richard was a 17 year old high school senior when he had an acute attack of severe abdominal pain with vomiting. He was rushed to the emergency room where his symptoms worsened. It was decided that an emergency appendectomy needed to be performed. The surgery revealed only a moderately swollen ileum and a normal appendix. His appendix was removed. Richard recovered and returned to school.

Richard's medical history, which the ER failed to obtain, revealed he has had episodes of abdominal pain since he was 14 years old, as have his mother, maternal grandmother, maternal uncle and older sister. He has also had minor injuries where the swelling was excessive in relation to the injury. In these cases the swelling was not accompanied by redness, pain, or itching.

Richard was referred to an immunologist after a suspicion of hereditary angioedema was noted. The specialist measured complement components and found that Richard's level of C1INH (C1 inhibitor) was only 16% of normal, confirming the diagnosis. After hearing about Richard's mishap in the ER, the specialist prescribed daily doses of Winstrol (stanozol) which caused a marked decrease in Richard's abdominal pain episodes. He has since had to be infused with recombinant CHINH, once for severe abdominal pain and once for swelling of his uvula, pharynx, and larynx.

1. Richard was also found to have a decrease in complement factor C4. Why would this be?

2. What other complement component would you expect to be decreased?

3. Despite the deficiency in patients with hereditary angioedema, they are not especially susceptible to infection. Why might this be? 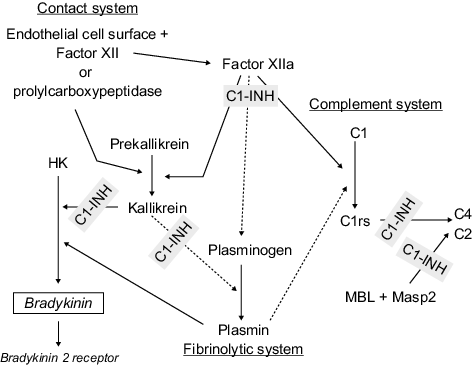