Question: introduction the physical properties of pure molecular substances such as...

In order for one substance to dissolve in another, the following processes must occur:

1.     Solute molecules are separated from each other. Solute-solute interactions resist this.

2.     Solvent molecules are separated from each other. Solvent-solvent interactions resist this.

3.     Solute and solvent molecules mix with each other. Solute-solvent interactions assist this.

The ability of two substances to dissolve completely in each other at any concentration is called miscibility. When two substances do not mix to form a homogenous (uniform) mixture, they are immiscible. Whether or not two molecular substances are miscible with each other can be accounted for as follows:

·       There is a natural tendency for molecules of different substances to mix amongst each other.

Forces between uncharged species (neutral molecules) are called van der Waals Forces. These forces can be categorised into three types:

1.     Dispersion forces (or London dispersion forces) are present in all substances. They are the weak forces that attract non-polar molecules to each other.

2.     Dipole-dipole interactions are present in substances that possess a dipole. These are stronger forces caused by the attraction of the δ+ part of one polar molecule to the δ– part of a neighbouring polar molecule.

3.     Hydrogen bonding is a particularly strong form of dipole-dipole interactions that are only present within molecules that contain a hydrogen atom directly bonded to fluorine, oxygen, or nitrogen.

The aim of this experiment is to test a number of pairs of substances for mutual miscibility, and to explain your observations in terms of intermolecular interactions. To make these explanations you will need to examine the structure of each molecule investigated and its polarity.

1.          What interactions must be broken and formed in order for two substances to be miscible with each other?

2.          Identify all of the intermolecular forces that would be present between molecules in (i) water and (ii) acetic acid.

4.          Based on your answers above and the information provided in the introduction to this exercise, would you expect water and acetic acid to be miscible in each other? Explain your answer.

In this home experiment you will be investigating the miscibility of some commonly used liquids found in your kitchen.

Pour approximately 1 cm of vinegar into a clean, dry glass. Add a similar amount of water. Swirl the glass thoroughly to mix the substances and observe whether or not they are miscible in each other. Record your observations in the table below.

On the basis of these results, fill in the remaining spaces in the table below by predicting what you would expect to observe. Complete the final row of the table with your conclusions on the polarity of each substance.

Hint: Remember that for molecules with both polar and non-polar groups, the group with the larger proportion will determine the predominant intermolecular force.

5.          Were the water and vinegar miscible with each other? Explain why or why not on the basis of the intermolecular forces present.

6.          Were the olive oil and other oil miscible with each other? Explain why or why not on the basis of the intermolecular forces present.

7.          Were the vinegar and olive oil miscible with each other? Explain why or why not on the basis of the intermolecular forces present.

10.       Make generalisations about the solubilities of:

11.       Explain the trends observed in Question 10, referring to the different interactions that may be present between solute and/or solvent molecules. (Hint: Review the information provided in the introduction.)

Solubilities of alcohols in water and hexane

12.       Examine the images of mixtures of various alcohols in water and hexane. Fill in the following table with your observations and answer the questions below. 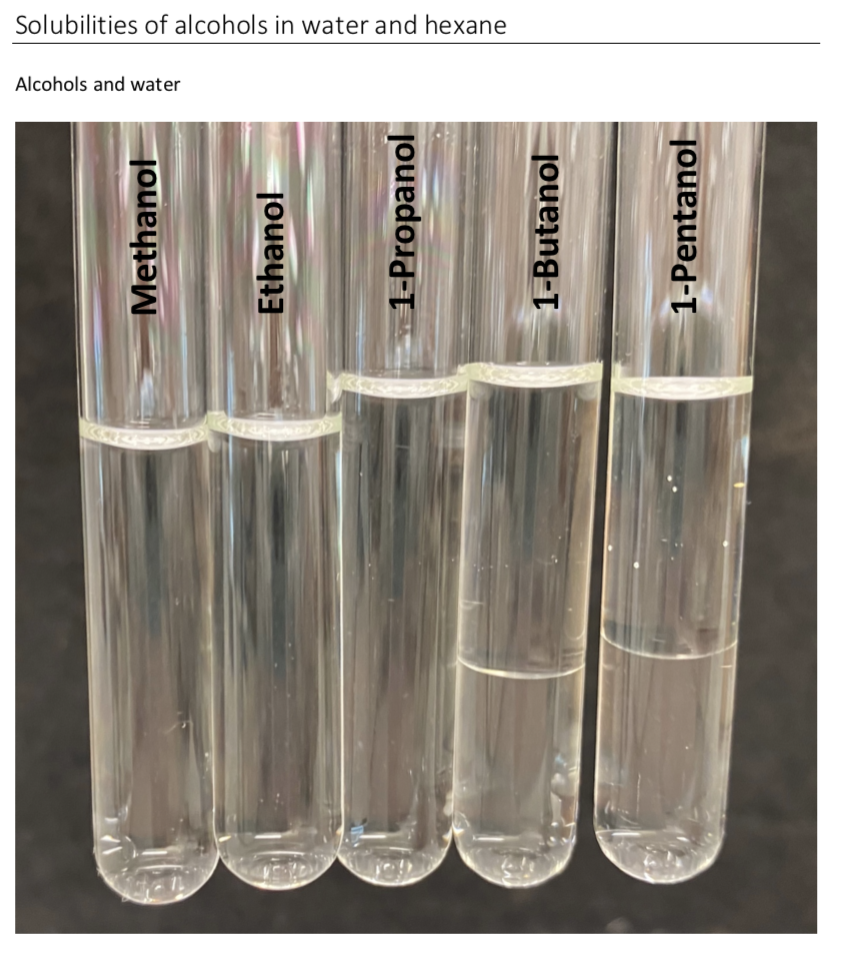 13.       On the basis of their chemical structures, do you expect water and hexane to be polar or non-polar solvents? Explain your answer.

14.       Describe the trends observed in the solubility of methanol, ethanol, 1-propanol, 1-butanol and 1- pentanol:

15.       Compare the structures of molecules of methanol, ethanol, 1-propanol, 1-butanol and 1-pentanol with respect to:

a.       the number of hydroxyl groups in their molecules.

b.     the size of the hydrocarbon portion of their molecules.

16.       How do the solubilities in water of alcohols with one hydroxyl group in their molecules depend on the size of the hydrocarbon portion of their molecules? Account for your conclusion using arguments based on intermolecular forces. (Hint: Review the YouTube video resources provided.)

In the first kitchen experiment at the start of this activity, we created two separate layers of olive oil and vinegar. To make the perfect salad dressing however, we need the olive oil and vinegar to mix together. We can achieve this by adding an emulsifier to the mixture, such as honey or mustard. Emulsifiers contain both a hydrophilic (polar) ‘head’ that can interact with polar compounds, and a hydrophobic (non-polar) ‘tail’ that can interact with non-polar compounds.

Add equal amounts of olive oil and vinegar to a glass jar with a lid (about 1 cm depth each) and add a teaspoon of mustard or honey. Put the lid on the jar and shake the mixture for 30 seconds. Observe what happens to the olive oil and vinegar mixture and answer the questions below. When finished, add some salt and pepper and pour on some salad to enjoy!

17.       What happens to the olive oil and vinegar mixture after addition of the mustard/honey? Explain why, using your knowledge of intermolecular forces.

18.       Soaps and dishwashing detergents are also examples of molecules that contain both polar and non-polar components. The non-polar ‘tail’ binds to grease and dirt, while the polar ‘head’ interacts with water allowing the dirt to be washed away.

Explain, in terms of intermolecular forces, why hand washing with soap is so effective at breaking down (not just removing) the viral particles that cause COVID-19. (Hint: You can research information for this question online, but make sure to cite any references you find and write the explanation in your own words).