Last year, MedSupplies—a national supplier of medical devices—posted its first loss in six years. The loss was a surprise to investors since the industry as a whole has been growing. Analysts have reached a consensus that at least part of the blame for the loss falls on Heidi Stevens, the national sales manager for MedSupplies. Ms. Stevens is responsible for determining the size of the firm’s sales force, and over the past year, she engaged in a significant expansion. In this industry, it is well understood that revenues generally increase as the sales force grows. However, each new hire generally adds less new revenue than the last, as the best sales opportunities already have been exhausted. At the same time, the salaries for medical device salespeople essentially have been constant. Analysts summarize the problem in the accompanying figure. They note that Ms. Stevens appears to have expanded her sales force to point  A  and argue that her sales force is too big. When approached for comment, Ms. Stevens replied, “Of course I would choose point  A  in that graph! Anything less means the company underperforms.” Both the analysts and Ms. Stevens agree that she has chosen point  A in the graph as the size of her sales force but disagree on the wisdom of this decision. Who is right? 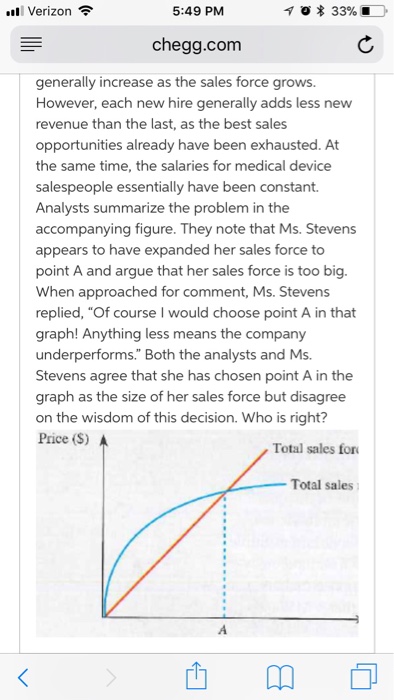