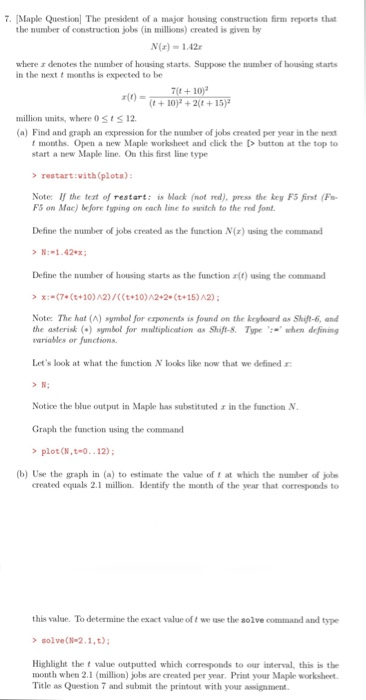 in the next t months is expected to be

(a) Find and graph an expression for the number of jobs created per year in the nextt months. Open a new Maple worksheet and click the [> button at the top to start a new Maple line. On this first line type

Note: If the text of restart: is black (not red), press the key F5 first (Fn- F5 on Mac) before typing on each line to switch to the red font.

Define the number of jobs created as the function N(x) using the command> N:=1.42*x;

Note: The hat (∧) symbol for exponents is found on the keyboard as Shift-6, and the asterisk (∗) symbol for multiplication as Shift-8. Type ’:=’ when defining variables or functions.

Let’s look at what the function N looks like now that we defined x:> N;
Notice the blue output in Maple has substituted x in the function N.

Graph the function using the command

(b) Use the graph in (a) to estimate the value of t at which the number of jobs created equals 2.1 million. Identify the month of the year that corresponds to this value. To determine the exact value of t we use the solve command and type> solve(N=2.1,t);

Highlight the t value outputted which corresponds to our interval, this is the month when 2.1 (million) jobs are created per year. Title as Question 7 and submit the printout with your assignment.