Question: mrna metabolism has been studied in the yeast s cerevisiae...

mRNA metabolism has been studied in the yeast S. cerevisiae, using strains carrying specific mutations for analysis of specific genes and mRNA modifications. The gene PGK1 was investigated after having been brought under control of the GAL1 promoter by genetically engineering the yeast. This promoter permits induction of the genes after growth on raffinose by adding galactose, as well as repression of the genes by addition of glucose.

. The PGK1 strain was grown on raffinose, induced by addition of galactose, and a cell sample harvested after 15 min (t = 0). Immediately thereafter, glucose was added, and samples harvested over time. RNA was isolated from the samples and quantitated by standard procedures. Ten μg was hybridized with a DNA-oligonucleotide (oligo1) which hybridized to the sequence present 9 to 30 nucleotides 5’ for the PKG1 stop codon. The samples were treated with RNase H; this RNase degrades RNA present in RNA:DNA hybrids. The samples were fractionated on 6% polyacrylamide/7.7M urea gels and the RNA transferred to nitrocellulose membranes and hybridized with a probe specific for PGK1 (a Northern analysis). The probe was a radioactively labeled oligonucleotide that hybridizes to sequences located immediately 3’ for the stop codon.. The autoradiogram from the experiment is shown in Figure 1B-1. The numbers refer to time in minutes after addition of glucose 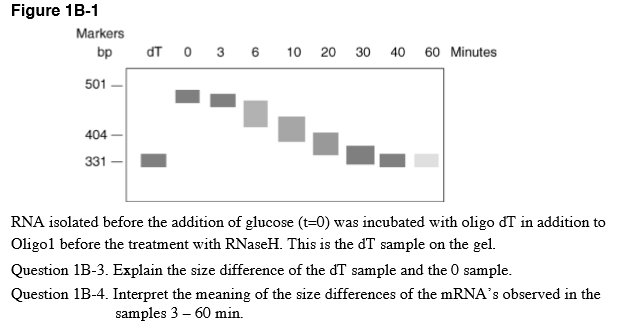 A separate gene, MFA1 was put under the same control, and cells similarly treated. The Northern from this strain is shown in Figure 1B-2. In this analysis, no Oligo1 or RNAse treatment was done. The probe was a random-primed nick translation of cDNA from the gene; i.e. radioactively labeled sequences able to hybridize with the entire mRNA was generated (the signal from MFA1 happens to be almost the same size as the signal seen in the blot for the oligo1-treated PGK1 mRNA 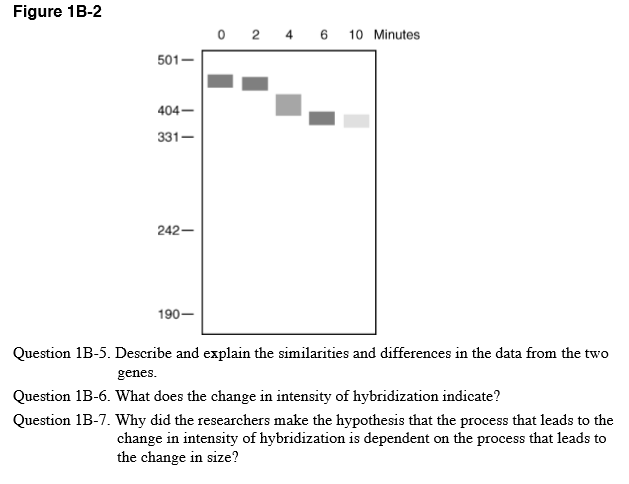