On January 1, 2017, Sheffield Company contracts to lease equipment for 5 years, agreeing to make a payment of $109,913 at the beginning of each year, starting January 1, 2017. The leased equipment is to be capitalized at $466,000. The asset is to be amortized on a double-declining-balance basis, and the obligation is to be reduced on an effective-interest basis. Sheffield’s incremental borrowing rate is 6%, and the implicit rate in the lease is 9%, which is known by Sheffield. Title to the equipment transfers to Sheffield at the end of the lease. The asset has an estimated useful life of 5 years and no residual value.

What amounts will appear on the lessee’s December 31, 2017, balance sheet relative to the lease contract? 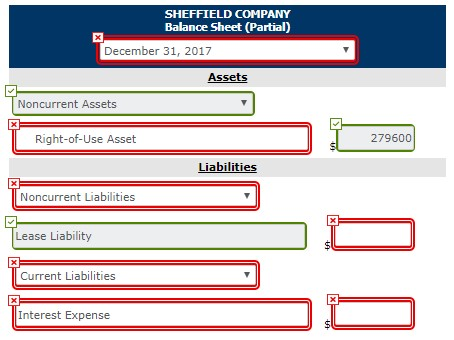