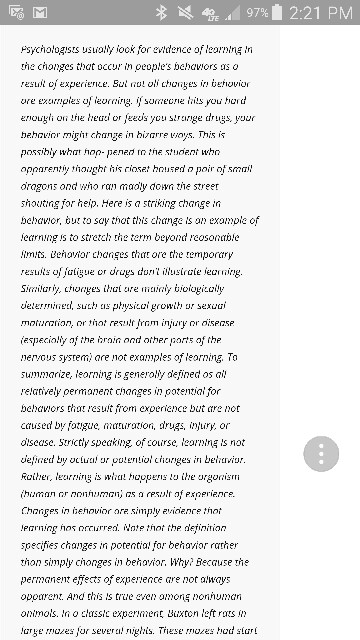 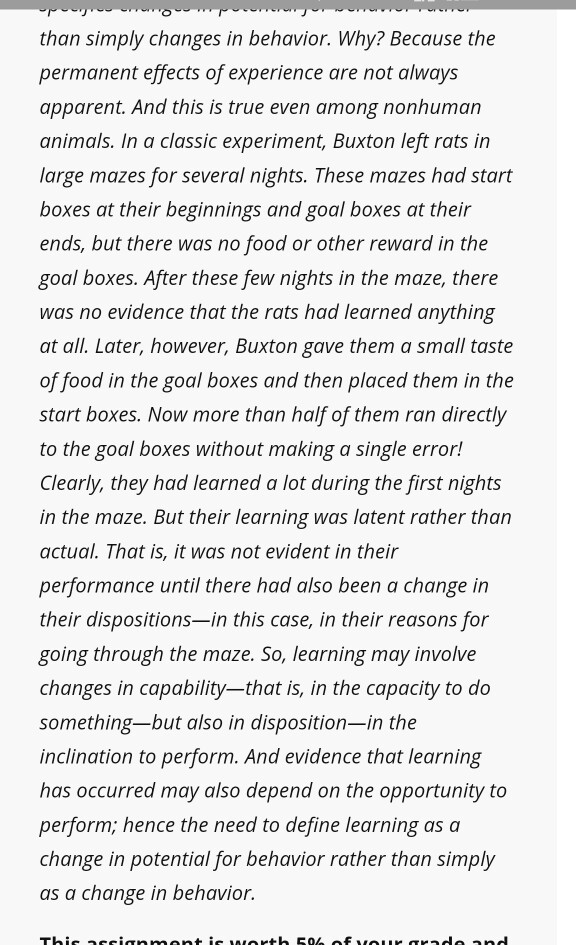 Psychologists usually look for evidence of learning in the changes that occur in people’s behaviors as a result of experience. But not all changes in behavior are examples of learning. If someone hits you hard enough on the head or feeds you strange drugs, your behavior might change in bizarre ways. This is possibly what hap- pened to the student who apparently thought his closet housed a pair of small dragons and who ran madly down the street shouting for help. Here is a striking change in behavior, but to say that this change is an example of learning is to stretch the term beyond reasonable limits. Behavior changes that are the temporary results of fatigue or drugs don’t illustrate learning. Similarly, changes that are mainly biologically determined, such as physical growth or sexual maturation, or that result from injury or disease (especially of the brain and other parts of the nervous system) are not examples of learning. To summarize, learning is generally defined as all relatively permanent changes in potential for behaviors that result from experience but are not caused by fatigue, maturation, drugs, injury, or disease. Strictly speaking, of course, learning is not defined by actual or potential changes in behavior. Rather, learning is what happens to the organism (human or nonhuman) as a result of experience. Changes in behavior are simply evidence that learning has occurred. Note that the definition specifies changes in potential for behavior rather than simply changes in behavior. Why? Because the permanent effects of experience are not always apparent. And this is true even among nonhuman animals. In a classic experiment, Buxton left rats in large mazes for several nights. These mazes had start boxes at their beginnings and goal boxes at their ends, but there was no food or other reward in the goal boxes. After these few nights in the maze, there was no evidence that the rats had learned anything at all. Later, however, Buxton gave them a small taste of food in the goal boxes and then placed them in the start boxes. Now more than half of them ran directly to the goal boxes without making a single error! Clearly, they had learned a lot during the first nights in the maze. But their learning was latent rather than actual. That is, it was not evident in their performance until there had also been a change in their dispositions—in this case, in their reasons for going through the maze. So, learning may involve changes in capability—that is, in the capacity to do something—but also in disposition—in the inclination to perform. And evidence that learning has occurred may also depend on the opportunity to perform; hence the need to define learning as a change in potential for behavior rather than simply as a change in behavior.