Question: question 1 20 marks an australian bank is concerned about...

An Australian bank is concerned about the potential impact of “data access and transfer issues” on the time required to conduct a withdrawal transaction through its automated teller machines (ATMs) across the nation. Management are concerned that the time taken to communicate electronic information between the ATM and their central database could be unduly slowing transactions for customers. The bank therefore undertakes a preliminary analysis by collecting data on withdrawal “Transaction Times” at ATMs at a number of its major Sydney branches. The first 20 data points from a sample of 70 are shown below.

a. Use your calculator or Excel to determine the mean and the standard deviation of this partial sample of 20 values. (2 marks) 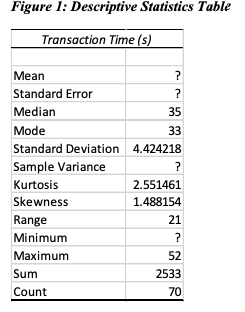 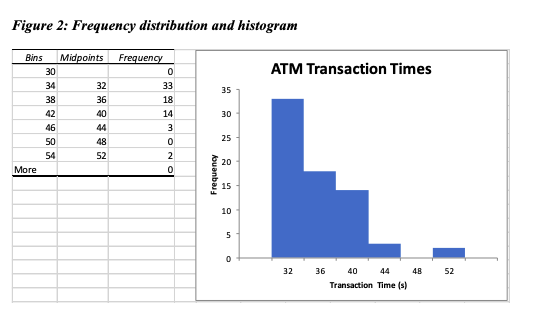 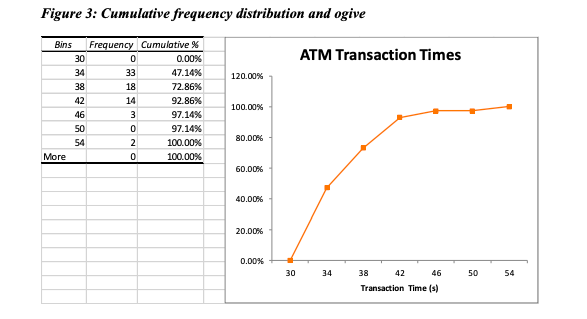 b. Determine the value of each of the following statistics that have been omitted from the Descriptive Statistics Table and the 5-number summary. (5 marks)

c. Describe the shape of the distribution of transaction times. Give three reasons from the statistical output provided that support your conclusion. Identify one reason each from Figures 1, 2 and 4. (4 marks)

d. The report provided from this data stated

‘There are no outliers in this sample of transactions times.’

Identify the output you used and explain how you used this output to determine your answer. (3 marks)

f. Management would like to understand the information which has been presented in Figure 2. State in a simple sentence what the first column in the histogram “tells” management about transaction times for the sample. (2 marks)

g. Given the bank’s objective, identify one potential shortcoming of the sample and state why this could be an issue. (2 marks)