Question: question 74 pts in a progressive tax structure the tax...

In a progressive tax structure:

The official poverty-line income is adjusted annually for _____.

The figure given below shows the Lorenz curves of two countries (Country A and Country B).
Figure 19.2
Total income (cumulative percentage) 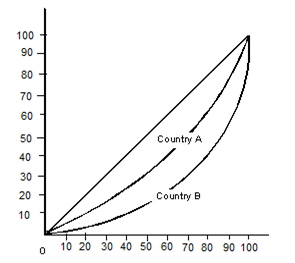 Refer to Figure 19.2. The richest 20 percent of the population in Country A receive:

The allocations of goods and services from one group in a society to another are called:

The product life cycle theory of comparative advantage predicts that a new product will first be produced and exported by:

According to Table 20.2, Australia has an:

Refer to Scenario 20.1. Which of the following statements is true?